The leasehold and ground rents scandal of Royal Tunbridge Wells

Freehold or Leasehold .. which is best? Well, when buying a property in the UK there are two main types of ownership – freehold and leasehold and, when boiled down, they mean the following...
Freehold: The person who owns the freehold of a property owns the property and the land it stands on.
Leasehold: As a leaseholder you do not own the land the property is built on. A leaseholder essentially rents the property from the freeholder for a number of years, decades or in some Victorian terraced houses, for centuries.
All apartments have to be sold as leasehold properties because of the very nature that you have a neighbour above or below you (so both of you can’t own the land) with the length of the lease being over 100 years (even more sometimes).
However, with some apartments – particularly Victorian and Edwardian houses converted into numerous apartments – which are sold on the basis that the leasehold apartment owner also owns part of the freehold (with other leaseholders in the same building), having what is known as 'share of freehold'.  Similarly, the Government also brought in legislation a number of years ago for more modern apartment blocks built in the 20th century where it allowed leaseholders to club together and have the right to purchase the freehold together.
Now we must stress, there is nothing wrong with leasehold – it’s been a useful type of homeownership since Norman times, it’s just that with a leasehold comes a potential extra responsibility. If there are four apartments in a block, who pays for the leaking roof when all benefit from a watertight roof? Who pays for the bad foundations, when all benefit from good foundations? Who pays for building insurances? .. the list goes on – so clauses are added to the leasehold agreement to ensure everyone is protected and pays their fair share of the joint costs of the building with service charges and a nominal ground rent (ground rent isa nominal rent, commonly quite low, often in the region of £50 per year to the freeholder of the property).
Whilst houses tend to be sold as freehold as it's a more unambiguous set-up, given there is only one property on the land. Contentiously however, in the last 20 to 25 years this has not always been the case with new-builds as some new homes’ builders have sold the leasehold to the buyer and retained the freehold. There is nothing wrong with that, it’s just in some cases (not all) they also added some oppressiveclauses to the lease of the property they were selling, which could be the next PPI scandal - albeit for property.
Government reports have emerged recently that suggest 12,000 leaseholders in the UK are facing ground rents – which they pay to the freeholder – that double in cost, usually every 10 years, but occasionally more frequently.
Builders started to add clauses into leasehold property sales with ground rent being set at £300 and £400 a year, yet it doubled every ten years. Though unwary first-time buyers were habitually told that their 500 and 999-year leases were practically freehold, the clauses inescapably meant that the ground rent would spiral to ridiculous levels meaning the average ground rent would be £23,750 a year by 2070 and £379,900 a year by 2130, making the properties practically unsellable today, with owners often left unable to re-mortgage too.
So, how many people are affected by this in our local area?
Well, using Government data, our research suggests that in Royal Tunbridge Wells 49 householders have bought a detached house, semi-detached house or town house (which would normally be freehold) as  leasehold. Not all these have onerous lease clauses, yet some do. I know it doesn’t sound a lot, yet that is potentially 49 lives ruined with houses they can’t sell - making them prisoners in their own property. 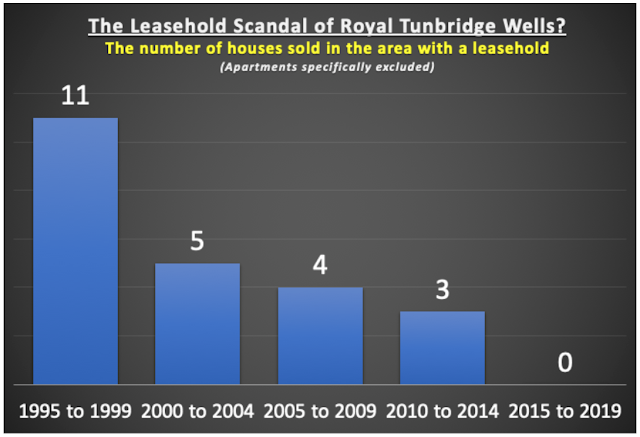 How long is an average Royal Tunbridge Wells property on the market for? 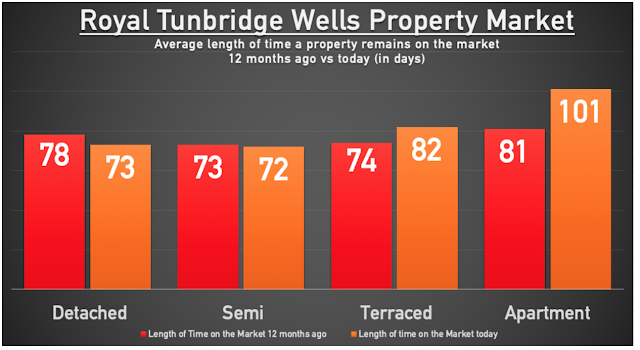 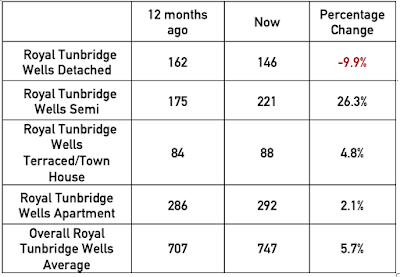 As for buying a Royal Tunbridge Wells property, searching for that dream house can take time as you have to consider the needs of your spouse, children, schooling, etc., what you can realistically afford and whether your current location can accommodate you until you find that perfect Royal Tunbridge Wells home.
Don’t forget that upwards of 10% of homes do not make it to the portals (the portals are Rightmove, Zoopla and On the Market), so don’t just rely on the portals to let you know what is coming on the market. The number of times I speak to disappointed buyers who missed out because other buyers registered directly with the agent for property, whilst they relied on the portals.
When it comes to buying a Royal Tunbridge Wells home, and so you do not make any decisions you will regret later on, taking your time is always the more practical option. The amount of money that is involved in buying a home and all the costs connected with it means that you should not rush into buying or selling without due consideration.
Posted by http://highqualityproductionmusic.blogspot.com/ at 5:14:00 AM No comments:
Email ThisBlogThis!Share to TwitterShare to FacebookShare to Pinterest
Labels: 277 Not surprisingly, the most valuable street of the top 20 biggest streets is Upper Grosvenor Road at £214.2m with an average value of £283,000 per property.
The street with the greatest number of movers in the last 3 years is also Upper Grosvenor Road, yet its saleability rate was only 9.1%, with London Road having the highest saleability rate of 20.9%.
The full breakdown can be found in this chart below. 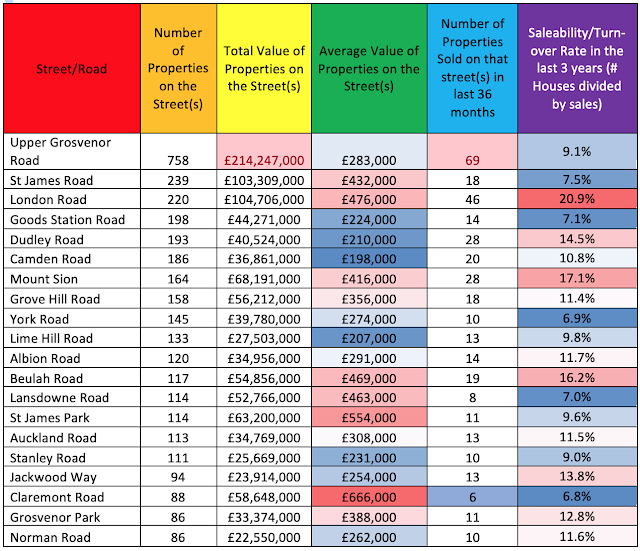 Yet, did you really think I wouldn’t get at all serious ..
The basic rudiments of the Royal Tunbridge Wells property market remain principally healthy in many parts of Royal Tunbridge Wells, yet the existing political environment means that the vital element of confidence has been diminished slightly in certain parts, and that is triggering a minority of potential property purchasers and house-sellers to vacillate, yet with unemployment at an all-time low, a record number of people with a job, ultra-low interest rates and decent mortgage availability (with the Banks and Building Societies tending to drop mortgage rates instead of increasing them), those Royal Tunbridge Wells first time buyers (and especially Royal Tunbridge Wells buy-to-let landlords) who have adjourned their next house purchase because of perceived political uncertainty should be reminded that talking to many of my fellow Royal Tunbridge Wells agents they have more homes on their books than at any time for the last three or four years, so there is a greater choice of Royal Tunbridge Wells properties to call your next home/BTL investment with a potential of securing a great property deal in the next month or so.
Irrespective of what happens with Brexit, Royal Tunbridge Wells people will still need a roof over their heads and as I have mentioned on a number of occasions, I have proved beyond doubt we aren’t building enough homes both locally in Royal Tunbridge Wells and nationally. If supply is limited and demand increases (as the population grows and we get older), prices in the medium to long term can only go in one direction. Upwards!
So, whatever happens with BoJo and Brexit – why wait, because once we get over that hurdle, there will just be another hurdle and another hurdle and by which time – we will be in 2029 and you would have missed the boat. We survived the Global Financial Crash, 3-day week in 1970s’, hyperinflation etc etc …  yet the choice is yours.
Posted by http://highqualityproductionmusic.blogspot.com/ at 5:10:00 AM No comments:
Email ThisBlogThis!Share to TwitterShare to FacebookShare to Pinterest
Labels: 275
Older Posts Home
Subscribe to: Posts (Atom)